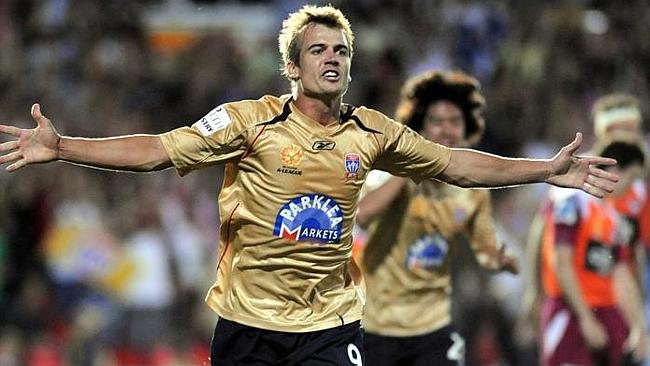 In the days following another Jets defeat in the FFA Cup Round of 32, the post mortem of the performance was undertaken in the media, on forums and through social channels. One point I didn’t see discussed was, as it currently stands, that Newcastle are now 620 minutes without scoring a goal in competitive matches. While Dimi Petratos came within mere millimetres and his brother Kosta came within Jordan Elsey’s head of breaking that drough , Ernie Merrick correctly pointed out in the Newcastle Herald the need to recruit more goals into the team.

This got me thinking about the Jets history of recruiting strikers, in particular those who have been allocated the shirt synonymous with the primary job of putting the ball in the back of the net – the number 9. With Roy O’Donovan the latest incumbent to this position, withthe opportunity to become just the 3rd Jets player to reach double figures ahead of him, lets take a look over the players to have worn ‘9’ for the Jets and their relative performances while wearing that shirt.

2005 – 2006 Ante Milicic
The former Socceroo was a massive signing for the Jets in the first year of the A-League. Forever written into the club’s history as the first scorer in the A-League, Milicic scored 7 goals in 20 appearances in his only season before heading to Queensland Roar.

2006 – 2007 Vaughan Coveny
A mid-season recruit the previous year, the New Zealand international scored 5 goals in 21 appearances wearing 9 that season. Coveny wasn’t retained at the end of that season and headed to new franchise Wellington Phoenix, following the demise of New Zealand Knights.

2007 – 2009 Joel Griffiths
After wearing 18 in his first season back in Australia, Griffiths scored 21 goals in 39 appearances, including a 14 goal season that brought the A-League title to Newcastle. It can’t be disputed that Griffiths is the Jets’ iconic number 9 and this period is by far the most successful of any wearing the shirt.

2009-2010 – Sasho Petrovski
During his time wearing the 9, Petrovski’s performances were underwhelming – scoring just 2 goals in 19 appearances (6 of which were starts). Despite this, the following season Petrovski would score 6 goals in 291 minutes of play for the Jets the following season to back up his ACL heroics.

2010-2011 Shuo Zhang
Branko Culina recruited the former Chinese international from Persik Kediri to add more fire power up front. And like the Jets that season, Shuo struggled and he scored his solitary goal in 8 appearances against Gold Coast United.

2011-2012 Michael Bridges
The Englishman was the next to wear the Jets 9, and like the two before him, struggled to find the net – scoring 2 goals in 17 appearances. It must be mentioned that Bridges appearances during this season were limited to just 4 starts and 13 from the bench in 614 minutes of play. He’d later vacate the shirt that was would be taken by his compatriot.

2012-2014 Emile Heskey
Arguably the highest profile player to wear a Jets shirt, let alone the number 9, Heskey was an immediate success for the Jets – scoring 5 goals in his first 6 appearances. During his first campaign netted 9 times in 23 matches before struggling with injury in his second, when he scored once in 19 appearances as young striker Adam Taggart had a break out season.

2014-2015 Joel Griffiths
After returning in the previous January to much fanfare, Griffiths would make 15 appearances and score 3 goals before being unceremoniously dumped from the team as part of a mid-season clear-out by then-owner Nathan Tinkler and coach Phil Stubbins.

2015-2016 Milos Trifunovic
New coach Scott Miller recruited Trifunovic to his new Jets team. Many Jets fans were torn on Serbian, but his record certainly holds up as the “Ice-man” netted 9 goals in 22 appearances, including 4 penalties. His goals per game ratio is one every 2.44 – the same as Joel Griffiths and Adam Taggart.

2016-2017 Aleksandr Kokko
Kokko was recruited by Miller prior to his departure from the club, and after sustaining an injury in the first half of his first A-League appearance, the Finn struggled to gain any momentum in his Jets career. His only goal in 13 appearances came against the Mariners, though he left legacy with fans after continuing to play with a broken draw sustained in the F3 Derby.

2017-currentRoy O’Donovan
The Irishman has been recruited to provide more mobility and aggression in the Jets front line. He showed at the Central Coast Mariners he can find the back of the net – often in spectacular fashion. It’s form he will need to replicate, with the help of those around him, for the Jets to break their finals hoodoo this year.

Looking over the 13 seasons, the “Number 9” has been worn 216 times, for an output of 61 goals (or a goal every 3.54 games). This means the player with the symbolic responsibility to put the ball in the net is scoring just over 7 goals per season (27 game season).I acknowledge there are many circumstances that impact these numbers and a striker’s effectiveness and I’m not suggesting this will reflect the contribution of O’Donovan on the Jets this season. But it is clear that a great output from the Jets marksman is needed if the club are to again play finals football.