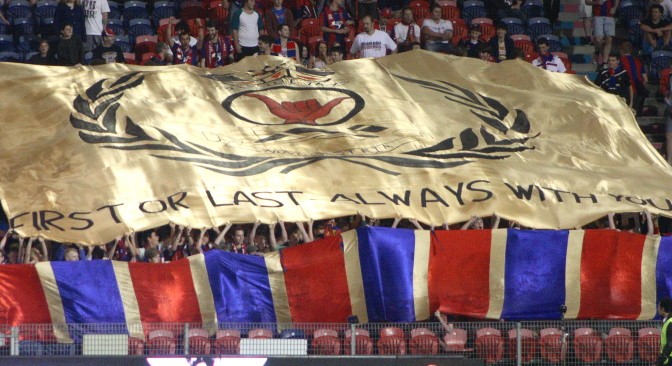 It has become evident that active support numbers and involvement have been diminishing over the past few months. Some of this is in no small part due to the performances of the team, but we have also been reading a large amount of feedback online as to other reasons people are avoiding the active area.

We moved to Bay 60 as part of a regeneration of active support, there was a number of reasons for this which you can read here but the main reason was the Western Stand was where the majority of supporters now sit. However after being located in Bay 60 since Jan 2014, it is clear that Bay 60 hasn’t reinvigorated active support as we hoped it would.

We are therefore announcing a trial for the final four home games of the season for the active area to be located on the Southern Hill in the seating in Bay 42. This is beneficial for a number of reasons:

We originally stated when we announced the Bay 60 relocation that our long term aim was to eventually end up on the Southern Hill anyway. However low turnouts and involvement have meant that active support could eventually cease at Hunter Stadium, which we couldn’t allow to happen. Some decisions had to be made to change things to reconnect with general supporters who might want to give active support a go.

We are also stating our intention to hold an open active support forum for any interested parties to attend during the 2016 A-League Finals Series to discuss the future of active support for the Newcastle Jets. This will ensure the off season is spent constructively working towards common goals for active support in season 12 and the future. We will confirm details for the forum in due course.

on behalf of the Committee of The Squadron FSC, Inc

The Squadron FSC is pleased to announce we have come to an agreement with our Club in regards to active supporter measures for the 2014/15 A-League Season. This agreement will see The Squadron take our place in Bay 60 as normal, rather than the planned protest location on the Southern Hill.

This decision has been made after several discussions with the club. The Squadron would like to thank all supporters of the Newcastle United Jets for their support during this time.

This agreement ensures that all supporters will have the ability to join The Squadron in Bay 60 on match days and help us support our team throughout the A-League season.

The Squadron FSC believes that these measures address our concerns surrounding the restrictions on who can and cannot join active support, as well as the disadvantaging those of less means who may not be able to purchase a full season membership. We believe that the above ensures that Bay 60 is open to all to sample the type of support we create for the Jets at home games.

Due to the new restrictions, we were unable to see a complete removal of the collection of data to be held by the Club, however we were prepared to work with the Club on this in favour of other issues in order to achieve an outcome for the benefit of all supporters, and to see our return to Bay 60.

While we still disagree with the introduction of the restrictions by the FFA, particularly around restricting who can and cannot be involved in active support and the collection of personal data, The Squadron would like to thank the Club for being willing to listen to our concerns and reach an agreement which is beneficial to all parties.

We continue to enjoy a fantastic working relationship and clear communication with the Club on a wide range of issues and look forward to working with them in the future.

Those who purchased General Admission memberships are able to swap their memberships to Bay60 through the club. A cost of $10, or $1/month on the payment plan will be incurred.