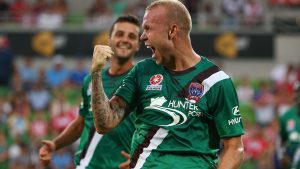 They cover off a wide range of topics while discussing Taylor’s time at the Jets: playing from youth all the way up to captaining the senior team, his debut, his favourite centre back partner,  scoring his first and only goal for the club, his mixed emotions about taking the armband, his disappointment about not being retained and how he is currently going over in Malaysia. Taylor also offers advice to young players aspiring the reach the A-League. We’re also joined by breakfast companion Kew Jaliens … wonder whose shout it was?!

END_OF_DOCUMENT_TOKEN_TO_BE_REPLACED

The Squadron FSC (Football Supporters Club) is very pleased to announce that we have reached our first ‪#‎NewyHelps‬ milestone – we have currently raised $2500 which fully funds our initiative for families staying at Ronald McDonald House Newcastle to attend Jets games at Hunter Stadium during the regular season. We sincerely thank everybody who has contributed to the #NewyHelps campaign thus far.

We now switch to our second initiative of the #NewyHelps charity campaign – to raise as much money as possible for Sam’s Fund for SUDEP (Sudden Unexplained Death due to EPilepsy). Sam’s Fund was set up in memory of Squadron member Sam Taylor who passed away earlier this year at the age of only 23. Sam’s Fund was initiated by the Taylor family to raise awareness of SUDEP and donate to researching the condition.

The goal of our second #NewyHelps campaign initiative is to donate at least $1000 to Sam’s Fund but it would be fantastic if we could raise even more.
Any amount raised from this point onwards will be donated to Sam’s Fund so we now request that if you haven’t contributed to the #NewyHelps campaign yet, please visit newcastlefootball.net/newyhelps and donate. Any amount you are able to spare is hugely appreciated and will be helping someone.

We remind you that anyone who contributes to #NewyHelps will receive an entry into the raffle where you can win some great prizes. Every $5 donated will get you a single raffle entry, $25 will get you 6 raffle entries. We will be drawing the raffle after the Jets game against Melbourne City on Sunday 13th December. All prizes in the #NewyHelps raffle are listed at newcastlefootball.net/newyhelps/raffle