Furns (@newyboys) has returned to host the last Jetstream Podcast of 2015, and is joined by Michael (@BodyNovo), Dave (@Jeterpool) and the return of proper journalist John Davidson (@johnnyddavidson). After spending as much time as possible on the opening question, we delve into the loss away from to WSW, including stats, breaking down the player performances, coaching and tactics. We also give our thoughts on the on-the-park performances in 2015.
We then review the off-field performances of the Jets in 2015, before discussing the upcoming January transfer window, interest in Adam Taggart, and the news that the Jets could lose players due to the non=-payment of superannuation.
We then preview the game on Sunday 3rd January against Melbourne Victory at Hunter Stadium and give our tips and thoughts on the rest of the games in Round 13.

We hope that all of our listeners and fellow Novocastrians enjoyed their Christmas break, and that you all enjoy a Happy New Year celebration. We thank you for choosing to listen to us in 2015, and hope that you will join us in 2016 for what we hope are better times. END_OF_DOCUMENT_TOKEN_TO_BE_REPLACED 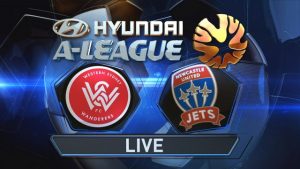 Welcome to the postmatch edition of our podcast – The Jetstream Extra.  In this Season 11 Round 12 edition, we have audio of the post-match press conference with @ScottGMiller after a @NewcastleJetsFC Christmas Eve defeat away to Western Sydney Wanderers. Michael (@Bodynovo) then interviews Jets supporter Mark “Tubby” Taylor (not the cricket one) to get his thoughts on the game.

END_OF_DOCUMENT_TOKEN_TO_BE_REPLACED

Michael (@BodyNovo) hosts this pre-xmas edition with regular contributor Dave (@Jeterpool) and two debutants Emma and Glen, live from Wests Leagues. They go into detail on a draw at home to Adelaide United, including the player breakdowns, stats and tactics. Dave also recaps the W-League game from Sunday against the Lady Reds.
Off-field news regarding the Jets reaching 9000 members, interest in Adam Taggart, the Jets Xmas party, the #NewyHelps campaign are all discussed. Not to mention that the new Squadron scarves have now arrived (yay)
Then they preview the next game on Christmas Eve against Western Sydney Wanderers at Pirtek Stadium and give their tips and thoughts on the rest of the games in Round 12.

Huge thanks to Emma and Glen for stepping in to cover Furns’ and Parkseys’ absences.