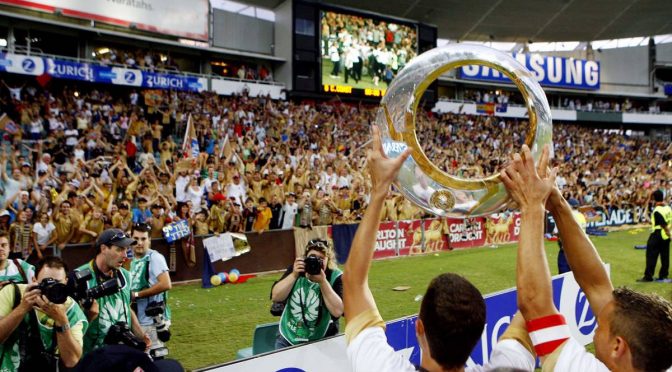 The Jetstream proudly presents, all in one convenient location, “The Championship Chronicles” – a special series of podcasts to commemorate 10 years since the Newcastle Jets won the A-League during the 2007/08 season.

This series, 3 years in the making, has been produced to allow the long time fans to recall and relive the most incredible season of the Jets in Newcastle’s rich football history. It importantly also allows new fans of the Newcastle Jets to enjoy the ride, a season where the legends of the past were born and names like Griffo, Thommo, Takka, Razzler and GvE came about. It recognises those involved on and off the field for their contribution to creating lasting memories for fans everywhere, whether in attendance at Energy Australia Stadium that year or watching on from afar.

Your host, David Keating (@jeterpool), takes a chronological look over the entire season – from recruitment to the Pre-Season Cup campaign, the whole A-League season and, of course, the finals series.

This series was made purely out of love for the great game of football and our Newcastle Jets. We hope you enjoy all it has to offer. If you enjoy, please share with your friends, like us on Facebook, and find us on your podcast app and listen in to our regular show by searching for the Jetstream.

Episode 1 – Continuing The Momentum
The Jets have finished the 2006/07 season with a heart breaking loss to Adelaide and are facing the task of replacing key players who have departed. We review the process of recruiting new additions, the pre-season cup and the first 4 rounds of the A-League.

Episode 3 – Coming Back to Earth
The Jets are cruising in the A-League, sitting comfortably in the Top 4. However, during the month of November the team began to falter, as we cover the matches between Round 11 and 16.

Episode 4 – Flying Towards the Finals
There are 4 games for the Jets to cement their spot in the Grand Final prior to the end of the A-League season. We cover the Jets end of the regular season between Round 17 and 21, including the unique situation in Round 21 where all Top 4 teams were on the same points, playing teams outside finals contention.

Episode 5 – The Rivalry Resumes
The Jets and Mariners face off in the Semi Final after finishing 2nd and 1st place respectively. We cover the home and away legs in this fixture, with the winner progressing to the Grand Final.

Episode 6 – The Greatest Match of the Season
After Queensland Roar defeated Sydney, they travelled to Newcastle to face the Jets in the Preliminary Final. This episode focusses on one of the greatest matches in Newcastle football history as the Jets progress to the Grand Final and, at the same time, qualify for the Asian Champions League.

Episode 7 – The Ultimate F3 Derby
The Jets will face the Mariners at the Sydney Football Stadium in the Grand Final. This episode covers the lead up to the match, including training, the memories of the players of what they remember around town, the trip down the F3 and untold stories as the team prepared for the match. Also – we pay tribute to the giant TIFO unveiled by the Squadron and learn how it came to be.

Episode 8 – We Got It! We Won It! It’s Ours!
The Jets kick off the Grand Final and the one of the biggest match in Newcastle football’s storied history begins. We cover the match, the (spoilers!) celebrations and the team’s trip back up the F3 to celebrate the fans in Adamstown.

Episode 9 – Season Reflection
In the final episode, we cover the after-math of the Grand Final, hear some additional stories from the players and hear what that season meant to all players in the squad.

Bonus Episode – The Fan’s Edition
In this bonus episode, we speak with 4 fans about the 2007/08 season. We reflect on their memories, thoughts on players, key moments and hear their stories from travels and the Grand Final.

Warning: This podcast contains coarse language. Please note, a clean version is not available for this bonus episode.

Thank you to all those who have given their time to make this series possible, including those interviewed, the staff of the Newcastle Jets, Jessica Beckett (@Griflikeafox) for the logo design and bensound.com for the opening and closing audio.

Again, we would love your support to help spread the word to all Jets fans to allow them the opportunity to hear from their favourite players and experience, again, the emotional rollercoaster that was Season 2007/2008. Please share this page on social media and promote this great series.

The Jetstream is a podcast run by a group of fans simply for their love of the team. Search for us in your podcast app to hear regular episodes all about the Jets of present.

Subscription links and previous episodes of our regular podcast are all available at our podcast landing page newcastlefootball.net/podcast

Subscribe to
The Jetstream Podcast - an independent podcast created by and for supporters of the Newcastle United Jets FC, Hyundai A-League and Northern NSW Football

Or subscribe with your favorite app by using the address below