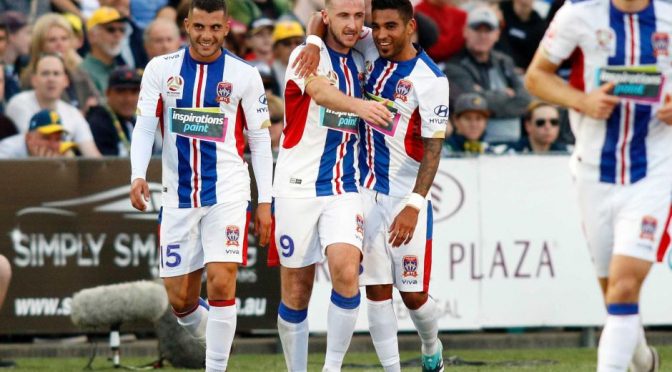 For many Jets fans, the first thing they look for upon the release of the A-League fixture list is when Newcastle play the Mariners. On Tuesday, Newcastle will play host to the Central Coast in the 43rd F3 Derby which has, over the years, brought many fans moments of brilliance, frustration, angst and elation. To mark the occasion, I decided to reflect on 5 moments I’ve remembered over the years from the A-League’s first derby.

It had been a massive off-season for the Jets, marked most notably with the highest-profile recruitment of Emile Heskey as marquee. The club were riding a wave of euphoria after a tight 3-2 win against Sydney FC the week before (yes it was the first Del Piero v Heskey clash).

What was most memorable about this derby for me wasn’t the result, which was a 2-1 win, but how the tone of the match was set from the kick-off when within the first few seconds Jets midfielder Ruben Zadkovich cleaned up left back Josh Rose in front of the Eastern Grandstand. For me, he was lucky to stay on the field but referee Ben Williams brandished the yellow, much to the Mariners’ disgust and Jets fan’s delight and Zadkovich stayed on the field.

What was he thinking? And what about the jubilation of Adam Taggart running away celebrating with absolute certainty that it was a goal? I had a really good view of Justin Pasfield’s brain fade, or drift of attention, that caused him to miscontrol the ball and scramble in a futile attempt to prevent an own goal in this match. It wasn’t like it was a particularly hard pass back to Pasfield, but I think the aggressive press from Taggart caused him to question what he was going to do and he managed to make a meal of it and allow the ball to trickle into the net.

Taggz, truth be told, almost had me convinced from his celebrations that it was legitimately his! Either way, this gave us a 2-0 lead in the derby that we unfortunately couldn’t retain as a penalty from Flores and an 80th minute goal from Sterjovski saw the Jets end up with a 2-2 draw.

I thought we could be the Mariners in this game. I really felt we could. The feeling around the club was changing because the results under Clayton Zane, who was interim coach at the time, were encouraging. The Jets had won consecutive games, and 3 in the last 4. Adam Taggart was starting to find the back of the net again and, most importantly, it was the first derby since the return of Joel Griffiths – and if anyone could explain what this fixture meant to the fans, it was him.

That feeling went away within the first minute, when a long range free kick by Eddy Bosnar skipped past Mark Birighitti. I couldn’t comprehend how that couldn’t be saved!? What was he thinking? Then after 6, we’re 2 down when Bernie Ibini scored. That was me done. Good feeling washed away. I was ready to leave a mates place in disgust, but Griffo brought us back to 2-1. But a 3rd for the Mariners finished us off and it was a long, silent drive back home for my wife and I from Rutherford.

What a start. We couldn’t have asked for better in what was my 2nd ever trip to Gosford for an F3 Derby. A long ball from Kantarovski in the Jets half put Ryan Kitto in behind and I recall taking a second to realise Paul Izzo was well out of his box as he contested the ball. He came off 2nd best in the challenge and I was convinced the play would be called back but Kitto, maintaining a level of composure delivered a wonderful cross to Nordstrand, who held his run and slotted the ball away. 1-0 Jets after 28 seconds.

That was only the beginning as the Jets would go on to score 3 more times in what would be Scott Miller’s last A-League game in charge of the club. To rub further salt in the wounds, travelling Jets fans would launch a plethora of wooden spoons on the turf in front of the away bay as the Mariners were consigned to last place on the table.

How good was Round 1 this year? There was understandably a sense of same-old Jets when Asdrubal scored after 5 minutes, but the response from the Jets was vicious and some-what unexpected. Not that we minded. A first half hat-trick, from a former Mariner’s player of all things, was the start of an emphatic 5-1 victory. Everyone played well and it was a bold statement of things to come, as we could only dream it would be at the time.

The train ride home went quickly, and the smile is still to fade. I haven’t felt such the levels of joy, elation and hope I did that night in a very long time. And it was definitely the quickest train ride back to Newcastle I’ve had in my living memory.

Now all remains is to back it up in a big was tomorrow night in what is a big game in its own right, but also the start of an important run of 3 home games. Hopefully we can see a big crowd at the Stadium tomorrow night that this team deserves.

Want to share some of the memories that stand out for you? Join the conversation in the forums on newcastlefootball.net/forums or on the various social media channels.