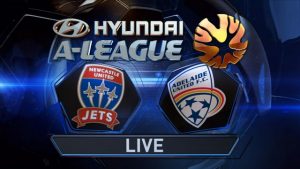 Join The Squadron at our new venue The Premier Hotel for prematch drinks. All supporters are welcome – u18’s will need to be accompanied by a supervising adult.
If you sign up to become a Premier Hotel member for $10, you receive $10 in credit on your card. Ask for a membership form at the bar. A Premier Hotel membership gets you a 5% discount on food & drink not only at Premier but also at Junction Hotel & Sunnyside Tavern. We will depart from the Premier 40 mins prior to the 5pm kickoff.

Starting line-ups from Last Meeting in Season 15/16 Round

PREDICTION: –
After what seemed like an uncharacteristically stable off season where a gradual build-up in friendly matches and an overseas tour, the Jets again delivered by terminating the contract of Scott Miller. After a 3 week search the Jets appointed former assistant Mark Jones in his first A-League coaching job – the third debut appointment in a row for the club.
Despite losing 3-1 to the Victory on a wild wet and windy night in the FFA Cup, the Jets have had a generally successful preseason – highlighted by the goalscoring form of Andrew Hoole and Andrew Nabbout. This might come too quick for Mateo Poljak (Hamstring) and Labinot Haliti (Knee) to return from injury.
Reigning champions Adelaide have lost a number of players, primarily in the forward line but have otherwise managed to retain the spine of their title winning team.
The Jets haven’t had a great recent record against Adelaide. Will Mark Jones have had enough time to make his influence on the team prior to this match? How will Adelaide’s new look forward line gel?
I think the departure of Miller so close to the start of the season will see the Jets struggle as they adapt to his game plan while the champions will have too much class.
LINE UP (Predicted) Duncan, Hoffman, Mullen, Boogaard, Cowburn, Ugarkovic, Brown, Nabbout, Nordstrand, Hoole, Kokko.
Adelaide 1-0