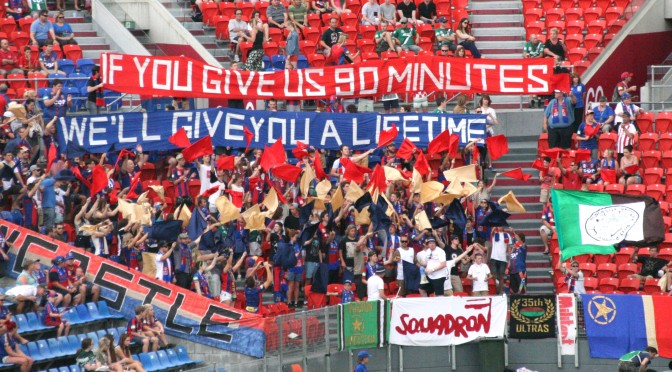 This article was sent in by Will who, along with his family are recent convert to Bay 60.

It’s Sunday morning following our late draw with the Wanderers. I’m feeling frustrated and confused. It’s not because of the performance on the pitch last night. It’s because I’m not sure what it is that supporters of the Newcastle United Jets want.

My wife, some family members, friends and I have all joined Bay 60 in the last couple of seasons since moving to Newcastle. We used to be fans who looked across and longed to join the active support. We were unsure. How do you become a part of an established group? We moved over and were welcomed with open arms, asked to share our ideas and formed new friendships.

We couldn’t believe the commitment amongst the group. Imagine never missing a Jets game. Home or away. Making sure that you were there to watch the team in Perth and Wellington. Driving from Sydney to Newcastle to do your part for active support at every home match. Putting hours into tifo. Working with the club, security, police and ground staff in an effort to build an active support culture that is welcoming and friendly.

Maybe it’s the air of Valentine’s Day lingering, but it’s all driven by passion. The one thing that probably justifies the time and money spent on supporting the club. It surely hasn’t been easy when the results on the pitch have been so disappointing. Yet their support has held firm.

You may have tired of my excessive admiration already, but it leads me to why I feel frustrated and confused about what it is that Jets supporters want. It would seem that they want a loud and vibrant active support group, and indeed atmosphere, at our home ground. That much is clear judging from some of the remarks I’ve heard, read and witnessed at the match.
Yet, it seems that there are fans acting on the contrary. I can understand that people feel disappointed with the current state of support around our home ground. I’m sure other members share such sentiments. It is after all, although not the only group, the active support group that is widely considered to represent the club. As a football community, Newcastle is far from its best. Of course, those judging the commitment of its members may not be aware of the effort put in by many of the regulars. Particularly when ridiculing the size of the squadron, a lack of noise and presence or claiming that the group should be ashamed of their support.

Perhaps someone could explain to me the reasoning of those who don’t actively support the team, in the sense that the Squadron do, but criticise the group when they’re not loud or big enough?

Complaining online or even in person and then returning quietly to your seat does not help build numbers and noise. In fact, I’d say fuelling an air of negativity amongst the fans might actually hold back others who might be considering becoming a part of the atmosphere around the ground. Might I suggest some positive support for the team and fellow fans? It’s not a contest for all those who think they can do it better. It’s about supporting the team and building another facet of our great city.

The Squadron is a group that encourages active support around the ground. Any Jets supporter is encourage to join in with the group in Bay 60 or around the stadium. Imagine the swell of emotion to be experienced at home games if the entire stadium were to sing ‘Never Tear Us Apart’ or join in with chants. We are one of only seven places in the country fortunate enough to still have a top flight football team in our city. Something that should be cherished instead of taken for granted.

If you’d like to be a part of the Squadron, purchase a Bay 60 ticket and come and say hello. The aim is to create a friendly, large and vibrant active support group. If you want to help build a positive culture of active support then we’d love to see you at the coast derby. To everyone else around the ground, with your support, in time we can build a great culture and atmosphere at the club.

Ultimately, we all want the same thing. A football club that we can be proud of. A home fortress where tickets are like gold. A ground filled with chorus and colour. We supporters should support the club and one another.

If you are unable to travel to the game in Wellington, please join us at our new away venue – Sydney Junction Hotel (SJ’s) at Hamilton and watch the game LIVE. SJ’s is our new venue for away Newcastle Jets fixtures. Show your Newcastle Jets Membership at the bar and receive $5 house beers.

Jets v Phoenix Trivia:
1. Lee Ki-Je’s first goal for the Jets was scored from the penalty spot. Who are the other 2 players to have achieved this?

2. Who was the last Jets player to score in the first 10 minutes of a match?

3. How many players have made an appearance for the Newcastle Jets this season?

As usual, we talk Jets on the field against WSW with reviews of players and tactics, off the field with the continuing ownership news and player movements, Mitch provides an update on former Jets and then we preview the game against Wellington in the A-League.
We also chat to @Dale_Warburton from the Yellow Fever Podcast – In The Zone.
Any questions, comments, feedback, topics, etc:
Facebook – facebook.com/JetstreamNewy
Twitter – @JetstreamNewy
email – podcast@newcastlefootball.net
Join the forums at newcastlefootball.net and go to The Jetstream subforum.